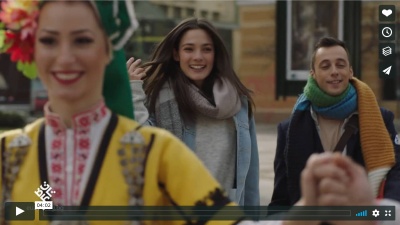 On the occasion of Bulgaria taking on the role as President of the Council of the European Union (EU) from 1 January 2018, a major public relations campaign was launched (Govt. of Bulgaria n.d.a). A central part of this campaign is a video titled "You can't help falling in love with her at first sight" (Govt. of Bulgaria n.d.b). The title is a reference to the girl that plays the female lead role, but more fundamentally to the country Bulgaria. Through its focus on culture, history and nature, the video aims to present Bulgaria to the outside world.

Everybody in Europe know the story behind the glossy view presented in this video. It completely bypasses the fact that Bulgaria is the poorest EU member country, as well as likely the most corrupt one. The final sentence delivered: "united we are stronger" sums it all up. The fact is that there is hardly a country in Europe that is more fragmented along dimensions like, for example, culture, ethnicity, and poverty.

The story presented can be understood to underlie the view that rich and powerful elites in the public and private sectors have of the country: namely that all are united through a shared history, a shared culture, and shared values and beliefs. Furthermore, that the Bulgarian culture encompasses and includes all citizens. Poverty, ethnic conflict, and corruption do not exist in this world view. This is a good example of how mass media – more specifically internet-based social media platforms – are being used to serve majority positions.

It has been argued that the video will function to teach Bulgarians about why their country is beautiful and unique. I do not believe this will happen, and for two main reasons. First, for those at the bottom of the system (many more than just Roma – think old people and unemployed people) what matters is economics and income, not natural beauty, culture, and history. Second, this – and similar – videos are aimed primarily at foreigners as well as already convinced urban and internationally oriented elites in Bulgaria who speak English. The destitute grandmother up in Ruse, as well as Roma, will never see this video. And if they do they will not be able to identify with it.

The fundamental problem in Bulgaria lies with the relationship between the citizens and the state. This is that there is zero TRUST – on the part of large population groups, and across the political and socio-economic spectrum – in the state. To wit, the present prime minister is viewed by most people as a crook. When – of maybe more realistically, if – the government manages to build such trust, and only then, will people begin to IDENTIFY with the country and its polity, as well as with its history, nature, and culture.

PS. The video may serve a purpose if it manages to open peoples' eyes as to the glaring contradictions between, on the one hand, how the government presents Bulgaria abroad, and, on the other hand, the stark realities at home, and subsequently to act upon this. Sadly, however, we likely cannot hope for this. The apathy among citizens, across the board, is so strong as to mitigate against it.