Maps and Our Changing World 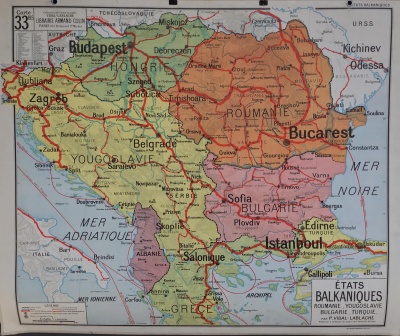 I have a confession to make: I love maps. Always have and always will. Ever since I became a member of the Boy Scouts when I was seven years, and used maps and compass to negotiate the local jungles near my hometown, and increasingly as I ventured out into the world, I have used maps, often together with a compass. Wherever I travel (and I travel a lot, mostly for business, less for pleasure), I collect maps. As I write this I am reminded that I have, among others, a series of detailed maps of the whole coastline of Vietnam, as well as satellite maps of an area in southeast Mauritania – both are places where I used to work.

I have a special love of old maps. When I lived in Bangladesh I collected maps made by the British of my village and region – I even travelled to the British Library in London to find and purchase them. Old maps tell you how the world used to look – borders change and place names change. The colonial powers saw their conquered world from their own point of view, and the idiosyncrasies of languages led to the renaming of many names, to the extent that the original name often got lost. Some examples from South Asia, a region I know well: Mombay became Bombay, Kolkata became Calcutta (the name Kolkata is itself a transformation of the original name which was something like Kalighat, that is, the harbour (ghat) next to where Kali (Bengal's most revered goddess) resides, while Dhaka became Dacca, and Chottogram became Chittagong (Chottogram means "Seven villages"). Today these old names have been restored (well, except Chottogram). The map in this article shows how South-eastern Europe and the Balkans used to look not too long back (this particular map was standard inventory in French schools up until and including the 1960s – and we had similar maps in Norway).

Globes are another source into the past. I still have a globe I received as a present (possibly a Christmas present) when I was a very young boy, and I did my first explorations and imaginary travels with it.

People are gradually losing knowledge and understanding of the past. We live for the most in the present. For many the countries of Abyssinia, Belgian Congo, French West Africa, Gold Coast, Rhodesia, South West Africa, and Tanganyika Territory will be completely unknown. Likewise, to refer to the map shown here, for many the country of Yugoslavia will be, at best, a vague memory.

Geography is crucial for understanding today's world, and maps are by far the best and most instructive way of representing and presenting the world. And, crucially, in order to understand the world today – not to mention the future world – we have to understand the past world. And maps, to repeat myself, is the best way of getting at that past history of our world.

Note
(1) This article was inspired by the above map which a friend, Olivier Decrock, posted on his Facebook page today, 1 July 2018. Thanks Olivier!
(2) Photo credit: unknown.